Russell Collins was the first runner in the SPRINT race - Male category in the MOVE Triathlon, completing the full race in just 45min and 46sec. We asked Russell to share his experience after completing the triathlon together with his son Riley. We loved Russell story and how enthused he is to have his son involved in sports and being active.

In this interview he shares his reasons and motivations behind completing a triathlon, his training routine and his preparations for the TRI.

No, I haven't won a Triathlon. I have been training and competing for about the last two and a half years. This season I have done the 5 races at 2XU which started in mid-January.  In that time, I had started at 91.5kg in the first race and 10 weeks later for the 5th race, I weighed in at 84.4kg. This has allowed me to get faster and finish higher in my age group competition.

2. Do you typically train or exercise? How did you prepare for our MOVE Triathlon event?

I have been training since the start of January when inside training opened up to us as soon as COVID restrictions were lifted. This would consist of Monday track running, Tuesday rest, Wednesday swim training, Thursday bike morning, swim/run training night, Friday rest, sat bike either inside or out, Sunday bike.

3. What was the most difficult thing about the MOVE Triathlon at Queens Park?

I would say that due to the rain the bike course would have been the most difficult. I decided to ride my road bike instead of my tri-bike as it was a wet and technical course, with a little hill in the middle. With all the roundabouts, I imagine many of the participants were being very cautious not to crash out. Also, coming off the hill there was a right-hand turn and in the middle of the corner, there was a metal drain access lid right on the turning line which was the tricky part, but I made it.:)

4. Do you have any tips or advice for staying in shape?

You just need to form a habit and stick to it every day. If you are training hard you have to make sure you do include rest within your training.  If you are not feeling motivated, a good idea is to try training with other people. I currently train in a group of people with different levels of abilities and I love how seeing them pushes me to get better and constantly improve myself. I am a member of the Greensborough Triathlon Club where I train regularly and they helped me to prepare for the triathlon as well.

5. Why did you register for the Triathlon?

At first, I entered my son into the MOVE triathlon at Queens Park.  This is his second-ever triathlon, the first being over a year ago. So then I decided to enter as well, but my primary goal was to be there for him, watch him swim, encourage him on the bike leg and then meet him at the finish and celebrate his success before it was my turn for the TRI.   I entered to have him involved as well, to see him completing a challenge like this.  So, thanks for running the event.


Thank You Russell for sharing your story! We wish you and Riley lots of luck in your next sports challenges! 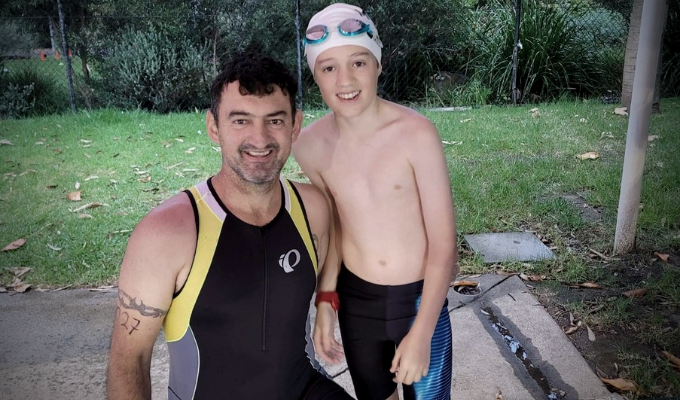